GREEN BAY, Wis. – Brian Gutekunst was a college scout assigned to the East Coast in 1999 when he watched his boss, then Green Bay Packers general manager Ron Wolf, use his first three draft picks on cornerbacks in part because he saw the problems that Minnesota Vikings receiver Randy Moss gave his team as a rookie the previous season.

Gutekunst was the director of college scouting in 2012 when his boss Ted Thompson used his first six draft picks on defensive players after the GM watched his defense finish last in the NFL in defense despite the Packers’ 15-1 record.

While Gutekunst hasn’t used a draft to focus so heavily on one thing – although he did take receivers consecutively in rounds 4, 5 and 6 during his first draft in 2018 – the drafts in 1999 and 2012 might come to the forefront of his mind this year when he decides how to replace Davante Adams.

“I think it’s too early to tell, but I think my history and even with Ted’s history, I don’t think we’ve ever shied away from taking multiple players at one position in a draft,” Gutekunst said at the recent NFL owners meetings. “So certainly if the right players are there, we wouldn’t shy away from that.”

Gutekunst hasn’t added a receiver since he traded Adams, the All Pro receiver, to the Las Vegas Raiders on March 17. While it’s possible he could sign a free agent or trade for a veteran receiver in the next three weeks, the more likely scenario is that Gutekunst uses the April 28-30 draft (ESPN, ABC and the ESPN App.) to replenish that position.

“I think the Packers come out of this draft with a minimum of two receivers, and maybe three,” ESPN senior draft analyst Mel Kiper Jr. said recently on Get Up. “It’s one of the strongest positions in the draft and fits well with what the Packers need. It’s a good year to need a receiver, because of all the goods out there. ”

Kiper projected that the Packers will use one of their two first-round picks on a receiver in his most recent mock draft (one round only): Arkansas’s Treylon Burks at No. 28 after using No. 22 on Texas A&M guard Kenyon Green.

ESPN senior draft analyst Todd McShay mocked the first two rounds but still had the Packers taking only one receiver with their first four picks: Penn State’s Jahan Dotson at No. 22 followed by Green at No. 28. He did have a pass catcher, Colorado State tight end Trey McBride at No. 53, followed by USC outside linebacker Drake Jackson with their second-round pick at No. 59.

Fellow ESPN draft analyst Jordan Reid, noting that the Packers have not taken a first-round receiver since 2002 (Javon Walker), wrote recently: “If the Packers stick to their age-old philosophy that has worked for over two decades and wait until Round 2 to pick a receiver, Alec Pierce (Cincinnati) and Skyy Moore (Western Michigan) would fit their scheme well. ”

That doesn’t mean the Packers won’t break from their recent drafting ways, but…

“If you look at the history of that position, there’s a lot of mistakes that are made within the draft,” Packers coach Matt LaFleur said recently. “Shoot, if you look traditionally at the Green Bay Packers, we’ve had a lot of success with second-round picks from that room and guys that were picked later in the draft. There’s only a few Ja’Marr Chases in the world. I do think we have seen in the last couple years, guys being able to transition and make an impact earlier in their career than ever before. ”

A steady stream of receivers have come through Lambeau Field on pre-draft visits in recent days. Among them: Tennessee’s Velus Jones, Baylor’s Tyquan Thornton, Georgia’s George Pickens and Burks.

When asked to plot out a potential strategy in which the Packers could take multiple receivers near the top of the draft, another ESPN draft analyst, Matt Miller, offered this:

At No. 22, Miller believes Drake London, Garrett Wilson, Chris Olave and Jameson Williams will be off the board, leaving Burks as the best fit.

Check out the best highlights that helped Arkansas WR Treylon Burks have an excellent college career.

“He gives Aaron Rodgers an excellent breaking route player who can post-up defensive backs and win on slants and comebacks,” Miller said, adding that “multiple teams selecting between 22 and 27 need receivers, so waiting until 28 could be dangerous. Dallas, Buffalo and Tennessee all have a need at receiver; and that doesn’t include a team like Kansas City or Detroit jumping Green Bay for one. ”

At No. 28, Miller said: “Should they either wait or look to double-up in Round 1, it makes sense to find speed at the position opposite Burks and Dotson fits that bill.”

However, Miller said if the Packers don’t take a receiver at No. 22, then he doesn’t believe Dotson is a good fit as a No. 1 receiver.

“In the scenario that a receiver hasn’t been drafted yet by Green Bay, North Dakota State’s Christian Watson is a better WR1 fit despite playing at a lower-level of competition,” Miller said. 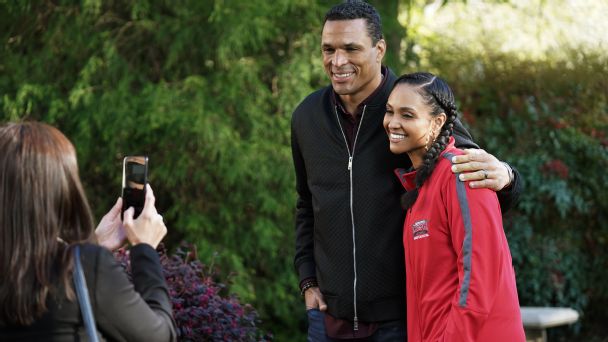 In the second round at either Nos. 53 or 59, Miller suggested possible receiver targets are John Metchie III (Alabama), Jalen Tolbert (South Alabama), Khalil Shakir (Boise State) and Pickens, depending on whether the Packers have already taken a receiver.

“As with the Round 2 targets, it depends on what they’ve done in previous picks,” Miller said. “But these are potentially available players who would fit the Packers’ offense in a variety of ways.”