SUNRISE, Fla. – There are times in any NHL captain’s tenure when that little piece of felt stitched to the front of his sweater can feel like a ton of bricks.

Sure, there are positives. There are only about 30 team captains in the league. It’s a position that reflects a high level of ability and esteem. Hockey captains are also, more times than not, the faces of their franchises. There’s a reason they are the first to touch the Stanley Cup each year.

But when things aren’t going so well, the captaincy can become quite the burden. Day after day, fans, media and sometimes even the player’s own coaches and front-office members look to him for answers. And those answers aren’t always easy or realistic.

This is the position Claude Giroux was in just a few weeks ago: He was the face of the Philadelphia Flyers, a team that after an eventful offseason was among the most disappointing in the NHL. It was Giroux’s ninth season as captain, and team success proved elusive during that run. The Flyers advanced beyond the first round only once (in the 2020 bubble) while he wore the “C.”

It had become inevitable that a trade was coming, with Giroux’s no-movement clause the only impediment. A little over a month ago, on March 19, Giroux waived that clause for a blockbuster deal that sent him to one of the NHL’s top teams, the Florida Panthers.

Now his jersey is devoid of anything other than the Panthers logo and his familiar No. 28. Giroux, one of the NHL’s best offensive players over the past decade, is just one cog in a Florida offensive machine that is lighting up the scoreboard like few teams have in recent memory, a team that looks primed for a deep run in the Stanley Cup playoffs.

Being free of those responsibilities doesn’t seem to be an unwelcome development for Giroux, who acknowledged that “playing in Philly, it’s a tough place to play, but I was even harder on myself.”

“I just wanted to go out there and win,” he said. “If I can say anything, it’s that me and the fans were on the same page.”

Asked if not having to worry about all of the extra unwritten duties that come with being an NHL captain can help him perform on the ice with the Panthers, Giroux said that yes, in fact, it can.

“For sure. Maybe you’re not overthinking every little detail possible out there. You go out there and just play the game, ”he said. “We have some great players here, and I’m trying my best to be able to complement them, and they’re doing the same for me. … And we’re winning a lot of games right now. When you go out there on the ice, you just have a good time. ”

It’s been good times aplenty for the Panthers lately. After Thursday’s 5-2 home win against Detroit, their 12th consecutive victory, the Panthers find themselves atop the league standings with 118 points, fighting with Colorado for the Presidents’ Trophy. They’ve gone 14-1-0 since plugging Giroux into the lineup, and he’s been a big part of the success, with 17 points in those 15 games.

Interim coach Andrew Brunette welcomed his new forward with open arms for a few reasons, including Giroux’s experience as a team leader.

“You can never have too many former captains in your room,” Brunette said. “For somebody that’s been in Philly as long as he has, been the face of the franchise for a while, the biggest thing we were trying to make sure is that he gets comfortable and enjoys the time with us and try to find a seamless transition for him. We all understand, especially when you’re in a certain place for a long time, when you come somewhere new, it’s probably pretty hard on him. I think he’s fit in really well, and he’s come in with a very unselfish heart and just wants to win. Guys like that, they seem to seamlessly integrate themselves into the team. ”

Anton Lundell, fifth in the league in scoring among rookies, with 43 points, took notice right away of how Giroux carries himself.

“He wants to win. You see that every day, ”the 20-year-old center said. “He’s a very competitive guy. I just try to learn from him, small things (like) faceoffs. He’s doing everything. ”

It’s been a process for Brunette to find steady linemates for Giroux, who has already skated with just about everyone in the Panthers’ top nine. Recently, he seemed to be finding chemistry with Jonathan Huberdeau. When on the ice together, Giroux and Huberdeau have outscored the opposition 6-3 at five-on-five, with an expected goals rate of 57.9 percent, according to Natural Stat Trick. In the process, Huberdeau briefly took over sole possession of the NHL scoring lead, surpassing Connor McDavid thanks to a three-point game Tuesday while on a line with Giroux.

But on Thursday, with the Panthers down forward Carter Verhaeghe because of injury, Giroux found himself on the left wing of center Sam Bennett and right wing Anthony Duclair to start the game. But he spent about four minutes at five-on-five with Huberdeau and Aleksander Barkov, too.

Despite his routinely finding the scoresheet since the trade, Giroux indicated it’s taken time to get on the same page with a slew of new teammates.

“I think just getting chemistry with guys you haven’t played with before, it takes more than one game or one practice,” he said. “It’s about being in the situation in a game and (being) able to read off your teammates. It was definitely not there early on, but slowly, every game, you (learn) where the guys are going to be. We’ve just got to keep building on that. ”

Brunette, who wrapped up a 16-year playing career in 2012, knows it’s not always a smooth transition for players who get dealt just before the trade deadline, which comes so late in the regular season. He said Giroux is approaching it all with an open mind, though.

“We’ve all seen it over the years: A lot of times at the deadline, it’s hard for the short 15- to 18-game segment to be a smooth transition, where sometimes it doesn’t fit,” Brunette said. “He’s been very selfless, and he really wants to work, and he’s been really good. It seems to be getting better for us every game. ”

The mixing and matching of lines aren’t just for Giroux’s benefit. Presidents’ Trophy chase aside, the Panthers clinched the Eastern Conference’s top seed with Thursday’s win, giving Brunette the opportunity to experiment with some combinations. That also helps his players prepare for the inevitable injuries and absences that come with playing multiple playoff rounds.

“Hopefully (we’ll have) a long playoff run here that we’re going to have guys playing with different guys,” Brunette said. “Obviously, adding ‘G’ and having him move around and feel comfortable with guys, I think that’s the biggest thing. It’s always healthy to have a little of that so you’re familiar when it does happen. … And you never know, you might find lightning in a bottle with quick chemistry. ” 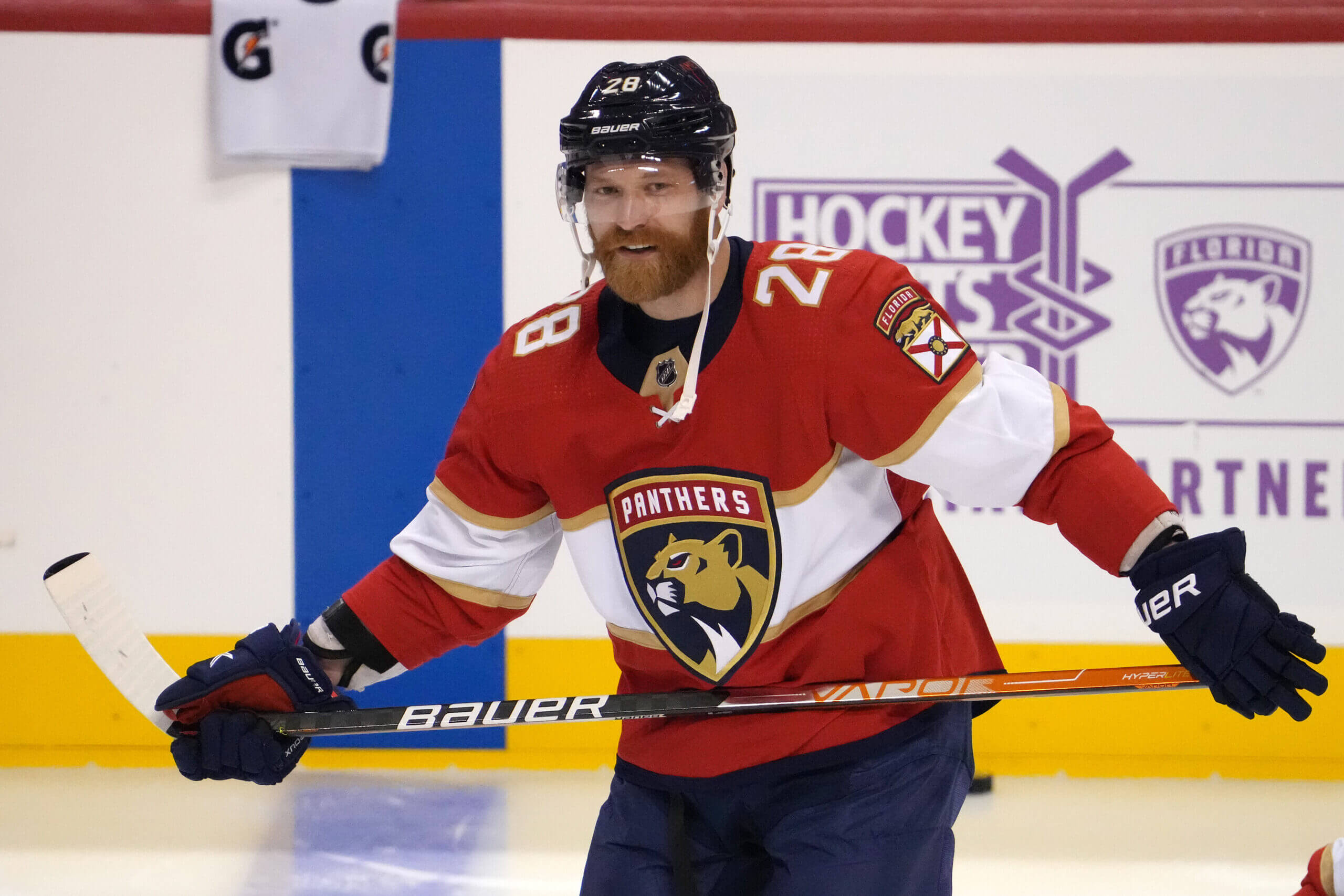 Giroux, of course, will let Brunette do his thing. He hasn’t gone on a deep playoff run since 2010, when the Flyers advanced to the Stanley Cup Final, but he fully understands what Brunette is trying to accomplish.

“Anytime you go on a playoff run, a lot of things change,” Giroux said. “Teams that you’re playing change, and sometimes you have to adapt. To be able to find chemistry with more than two guys, I think, is huge. That’s what I believe we’re trying to do. ”

In the meantime, Giroux is committed to being the same guy he’s been throughout his exceptional 15-year career, letter or not.

“I’m not going to change who I am. Whether it’s to be vocal or try to play the right way to lead by example – I’m a true believer you don’t need (a letter) to lead, ”he said. “But obviously you come into a new team and there’s a leadership group together… I’m just trying to complement them and help them.”