This season, diehard VGK fan and legendary combat sports columnist Kevin Iole will be delivering columns a few times a month on Sundays.

Before the Golden Knights had ever played a game, owner Bill Foley said his goal was to reach the playoffs in three seasons and bring a Stanley Cup championship to Las Vegas within six years.

On Sunday, his team begins a stretch of four games in six nights, with three of them on the road, likely needing to win each of them to qualify for the playoffs in Year 5 of the franchise’s existence.

The Knights are further from the Stanley Cup than they have been since those halcyon days early in the 2017-18 season when nobody truly appreciated what was about to happen. That team won the Pacific Division, won the Western Conference and won Game 1 of the Stanley Cup Finals in 2018.

Washington, of course, swept those final four games, but the expectation among Vegas’ rabid fan base was that it was just a matter of time before a parade would be held.

George McPhee and Kelly McCrimmon, who along with their scouts and staff did such brilliant work putting a team together during the expansion draft, have largely bungled their way through the next four seasons. Their heavy-handed approach has turned off many, and though the fans who were in T-Mobile Arena for the pulsating overtime victory over the Capitals on Wednesday nearly blew the roof off the building when Shea Theodore scored the game-winner against Ilya Samsonov, Knights’ fever in Las Vegas is unquestionably down.

McPhee and McCrimmon have made a mess of the team’s goaltending, among other things.

On Friday, journalists from both The Athletic and ESPN reported that VGK goalie Robin Lehner was undergoing season-ending surgery. An hour or so later, Coach Pete DeBoer shot that down and said Lehner is healthy, expected to dress and available to play for Sunday’s home game against San Jose.

Now, is it possible that The Athletic’s Jesse Granger and ESPN’s Emily Kaplan both got it wrong? Sure.

But I would bet everything I hold dear that they were each told about Lehner having surgery by more than one person either in the Knights’ organization, by Lehner’s agent and / or most likely by Lehner himself.

Meanwhile, the Knights’ record on truthfulness is not good.

This is the latest episode in the goaltending follies that has unquestionably put jobs at risk. What seemed unthinkable in September is now something that may be more likely than not: If the Knights miss the playoffs, Foley may well clean house.

If he does, the way McPhee and McCrimmon messed up the goaltending situation will go a long way toward explaining his decision.

Marc-Andre Fleury fell into their laps in 2017, which is kind of like picking up the Daily Double winner on the ground at the race track. When the Knights were officially granted an expansion franchise by unanimous vote of the NHL’s Board of Governors on June 22, 2016, Foley could not have imagined that a player like Fleury would be available.

Fleury had just won his second Stanley Cup ring with the Pittsburgh Penguins. And while Fleury wasn’t the best goaltender in the NHL – and never was during his time in Pittsburgh – he was always among the best.

VGK’s run to the Stanley Cup doesn’t happen in 2018 without Fleury’s brilliance. And though his play dipped a bit in the 2019-2020 season after his father died, bringing in Lehner at the trade deadline created more problems than it fixed.

Whether we blame Fleury or his agent, Allan Walsh, for the ill-advised sword-in-the-back tweet that came out during the playoffs in the bubble later that season doesn’t matter. It never would have occurred had McPhee and McCrimmon simply maintained the status quo in goal.

They needed a better backup than Malcolm Subban, but what they did to solve a backup goalie problem was to create a starting goalie problem by bringing in Lehner. NFL coaches and general managers go out of their way to avoid quarterback controversies, because it divides the team and often leads to lesser play by both players.

The same is true of goalies in the NHL.

Last season, when Fleury regained the No. 1 job and won the Vezina Trophy, the Knights had a $ 5 million backup goalie. And then in the summer they gave away their starting goalie for nothing, a pattern repeated with so many players since they started, because of their own mismanagement.

Lehner has been repeatedly hurt this year and unable to play at the level a Stanley Cup-winning goalie must. And I had no problem with DeBoer’s decision to yank Lehner after the 1st period of the Washington game on Wednesday in favor of Logan Thompson. Lehner allowed a shaky goal and didn’t look confident. He’d struggled with several saves he did make. 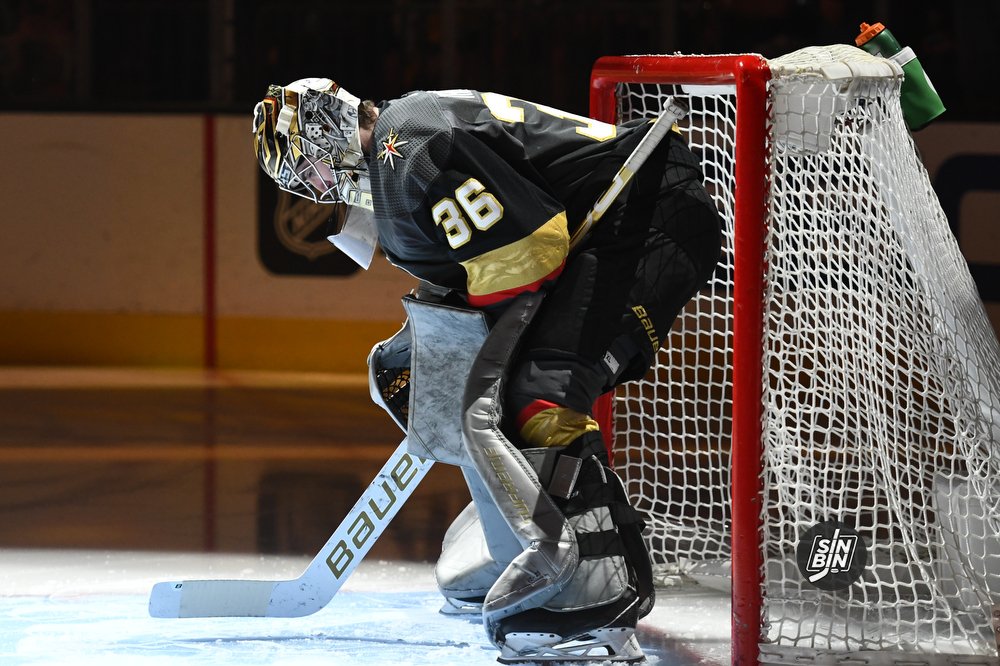 DeBoer faced an untenable situation. He knows if this team misses the playoffs, he’s probably done. And so his choices at the end of the 1st period Wednesday were either to go with a goalie he could see was fighting the puck, or yank him and potentially ruin their relationship forever and go with a rookie. He went with the rookie in the best last effort to save his job.

With the cap only going up $ 1 million next year, the Knights are going to be in difficult financial straits again, so fixing this will be a monumental task. It’s hard to imagine they’ll be able to bring Lehner back next year. But after the year he’s had and the injuries he’s been through, they may have to give up something to get someone to take him. They may have to do the same with Evgenii Dadonov.

Foley may be a bit more desperate to act than usual, as well. When this team’s window expires, a rebuild will be tough. There aren’t any sure-fire prospects in the system and they aren’t drafting high to claim the elite talents.

It’s next-to-impossible to build through free agency, but that’s what they may have to try. They don’t have a first-round pick this year thanks to the Jack Eichel trade, unless they miss the playoffs, get lucky in the lottery and draft in the Top 10. If that happens, they’ll lose their first next year.

Reilly Smith, one of the most critical players on the team, is set to become a free agent and may be out of their price range. They’ll have to move Laurent Brossoit’s $ 2.3 million salary. Nic Roy is going to command a big raise on the $ 750,000 he’s made this year.

Further complicating things, Mark Stone and Alex Pietrangelo each have no move clauses in their contracts, and Lehner, Dadonov, William Karlsson, Max Pacioretty, Jonathan Marchessault and Alec Martinez each have modified no movement clauses.

The playoffs are on line this week.

So, too, may be the jobs of the guys who built this team. That’s something no one gave a thought to when camp began in September.

** You can find all of Kevin’s tremendous boxing and MMA work at Yahoo Sports here. **