NBA — On the occasion of the 30th anniversary of Michael Jordan’s second NBA title and Olympic title, but also the 40th anniversary of his NCAA title, Basket USA takes you exceptionally in the footsteps of “His Airness”…

For nearly two weeks, in the company of our partner “Hardwork Association”, a group of French people passionate about Michael Jordan travels to the United States, to survey Durham, Chapel Hill, Wilmington, Charlotte, Chicago and Los Angeles.

Objective of this journey, over 20,000 kilometers long: to retrace the route and unearth some (very) well-kept secrets of the one that many consider to be the ” GOAT (Greatest of All-Time)”.

Coming out of a short one-day detour through Los Angeles, what better destination to conclude this ten-day trip than a return to Chicago ? THE city ​​which obviously best symbolizes the career of Michael Jordan and, without any possible dispute.

As soon as you leave the airport, after more than 30 hours of travel between LA and “Windy City”, the contrast between the California sun and the Illinois rain is enough to quickly undermine morale. But this has at least the merit of pushing the few hesitant to join (briefly) the arms of Morpheus, the time of a nap, while waiting for 1 p.m.

In other words, the schedule of the meeting with Cheryl Raye Stouta radio journalist in Chicago for nearly 40 years, specializing in sports and known for having been one of the few — if not the only — but above all the first, to establish a relationship of trust with Michael Jordan.

” It’s important to involve these kinds of people. They are old and the duty of memory is essential to continue to perpetuate the legend of [Michael Jordan]. We must pass on to the youngest “, will estimate after the fact Kevin, the man with the cap of the group, at the initiative of this invitation.

For two hours, the “Jordan Family” and Cheryl Raye Stout discuss the career of “MJ”, his report to the press and his relations with his teammates.

An exciting moment, which has the gift of reinvigorating (almost) everyone for the afternoon, some heading to the “Water Tower” for shopping (very oriented Bulls, basketball and sneakers), while others decide to explore a few different corners of the city, in a more independent way, like the fire station of the series “Chicago Fire”.

Before an evening which, due to fatigue, is intended to be quite brief. 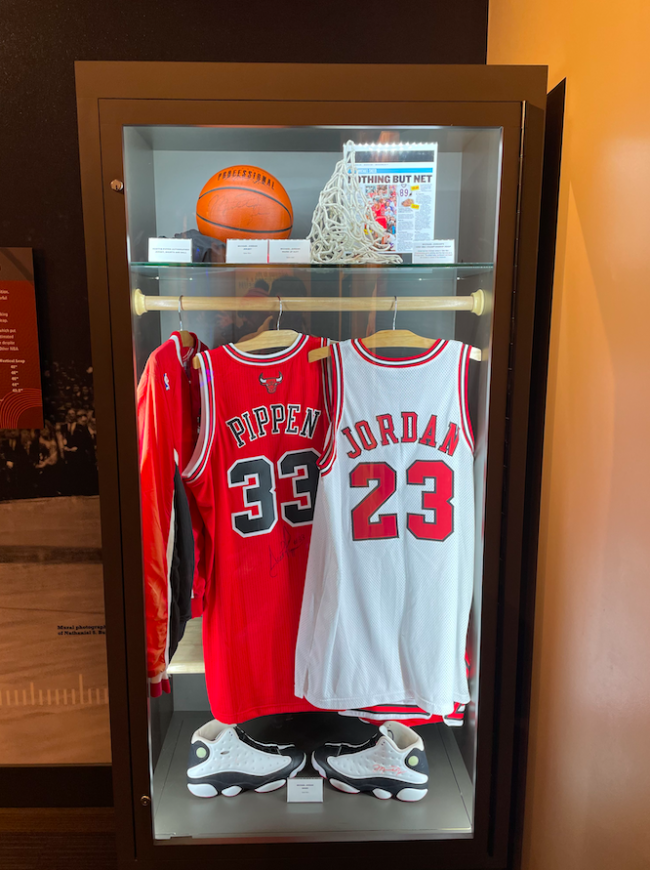 We found the basket of the “Last Shot”

The next morning, the group’s batteries finally recharged, the time has come to discover the Chicago Sports Museum, located on the top floor of this famous “Water Tower”. A must for any sports fan who goes to “Chi-Town”. Practical question, count 10 dollars to enter the museum and 30 minutes to visit it in its entirety, without missing a thing.

Inside, there is the basket used during Game 6 of the 1998 Finals, at the Delta Center in Salt Lake City, which saw Michael Jordan’s “Last Shot” recorded there. On the basketball level, “His Airness” is obviously much put forward, in the same way as Scottie Pippen, Derrick Rose or “Benny The Bull”.

But the real strength of this museum lies in its interactive nature, because you can measure your relaxation, your wingspan, your reaction speed or the size of your hands. In addition, you can also virtually practice multiple activities related to basketball, baseball, American football, car racing, ice hockey and football (referred to here as soccer).

” It’s really nice, it’s changed a lot compared to the last time I came there, in 2018. It’s much more interactive, there weren’t all these activities, it makes the visit very fun remarks Tsu, who takes the opportunity to show off his talents as a quarterback. 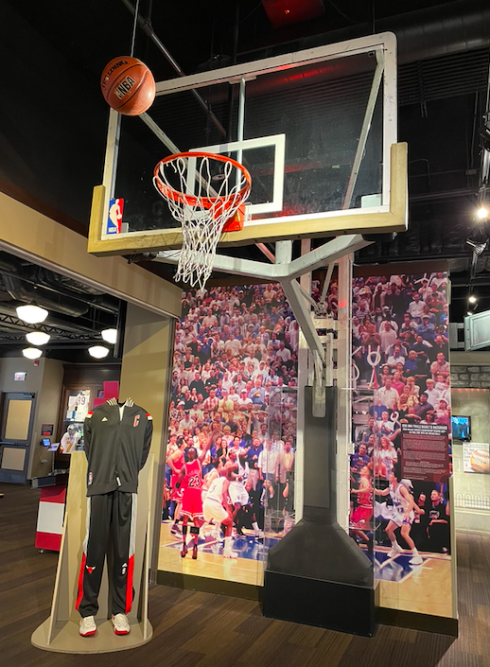 The (re)discovery of the United Center

Once the visit to the museum is over, head to the United Centertheater of an enticing Bulls/Clippers the same evening. ” It’s a crazy thing, it takes me back 25 years, [l’enceinte] It’s incredible “Enthuses Kevin, delighted to return to the place where Chicago won its last three NBA titles (1996, 1997, 1998), after winning the first three (1991, 1992, 1993) at Chicago Stadium.

Mythical, this place becomes more so under the snow, of the game that evening. Nevertheless, it is better not to linger too long in front of the room, because the outside temperature remains difficult to bear. And nothing warms up more than a detour to the franchise store to do some shopping. ” Luckily I didn’t come here sooner “Slips Akwa, seduced by several articles.

The credit card heats up in the store, but not as much as the phone’s “camera” application, when each member of the “Jordan Family” poses in front of the famous michael jordan statue, which sits not far from the entrance to the United Center. A United Center that some had already been able to discover during the week, the time of an NCAA game and/or an NHL game. 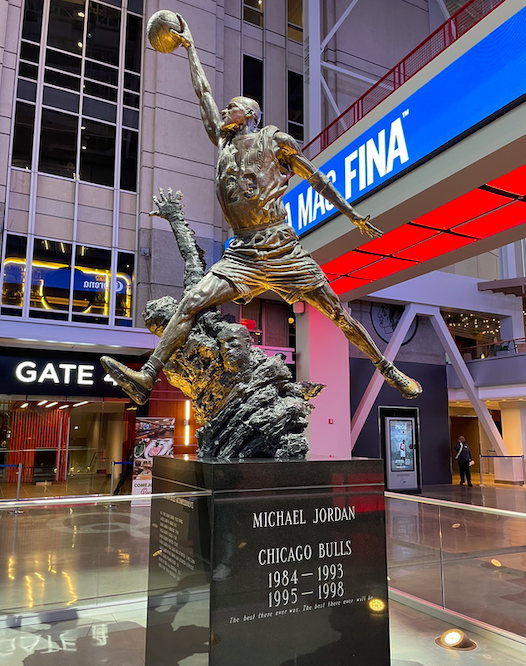 Another possibility for cliché lovers: take a virtual photo with certain Chicago players, of your choice, on an interactive touch screen. Like when you order in a fast food restaurant. ” They are strong these Americans… laughs Léo, the group’s official videographer.

But enough of photographs, because it is necessary to go and settle down without further delay in the stands of the room, in order to attend the pre-match warm-up, with the players of the Bulls and the Clippers parading on the floor.

Among them, Nicolas Batum and Nikola Vucevic, two Francophones who logically stand out as the darlings of this small French colony. DeMar DeRozan, Zach LaVine and Paul George are also in the game, as is Ayo Dosunmu (who took 30 minutes for his fans after his warm-up!), while the “Jordan Family” took the opportunity to take a photo with the cheerleaders from Chicago.

Almost immediately, it’s the turn of Nikola Vucevic to come and say hello to the tricolor group, at the edge of the field, before taking a selfie with everyone. 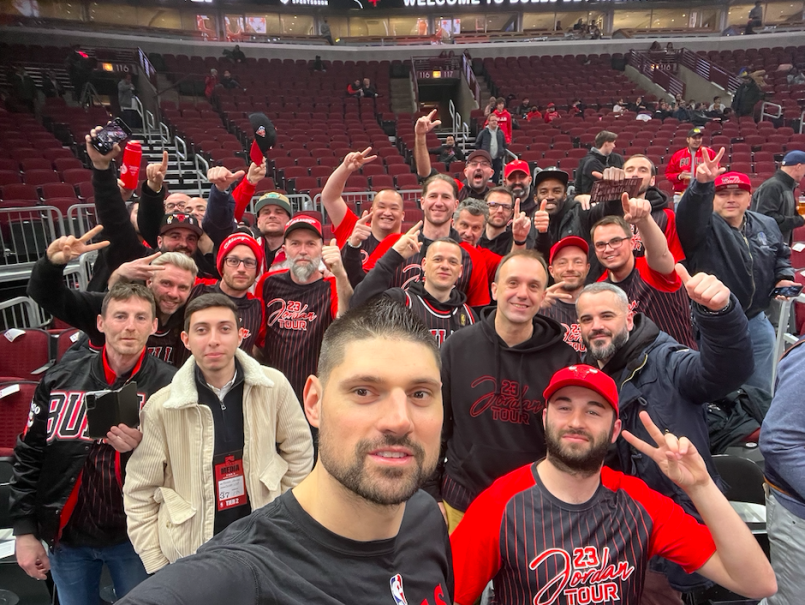 Victory for the Bulls + 50 points from DeRozan as a conclusion

While some have the chance to interact with the illustrious Sam Smith (the author of “The Jordan Rules”), in the bays of the United Center, the Bulls/Clippers kickoff is approaching and the pressure is mounting. Aware of the chance he has to attend an NBA match from this mythical room, which rocked his adolescence, Greg can not restrain his emotion, just before the “Star-Spangled Banner” resounds.

For his first encounter in Chicago, this Basque with a contagious joie de vivre will definitely have the opportunity to revel in an encounter of madness. Because it was indeed difficult to imagine a better outcome for this unique stay than a stunning victory for the Bulls, in extensionin a crazy atmosphere and with a match at 50 dots (!) by DeMar DeRozan!

” Between the close game in Charlotte, the improbable ‘comeback’ of the Clippers in Los Angeles and the extension in Chicago, we were spoiled “Aptly explained Greg.

9:30 p.m.. After taking a few last photos around the statue of Michael Jordan, the group devotes itself to a general (and moving) assessment of the trip, under a snow finally quite representative and symbolic of what can be observed in certain American films with rose water.

Casually, this journey had everything of a real fairy tale for this “Jordan Family”, now united forever by this “Jordan-esque” pilgrimage. Impossible to know if such an experience will be reproduced in the future but, one thing is certain, these ten days of “road-trip” spent between North Carolina, Los Angeles and Chicago will remain engraved forever in the memory of these 30 lucky came from all over France. 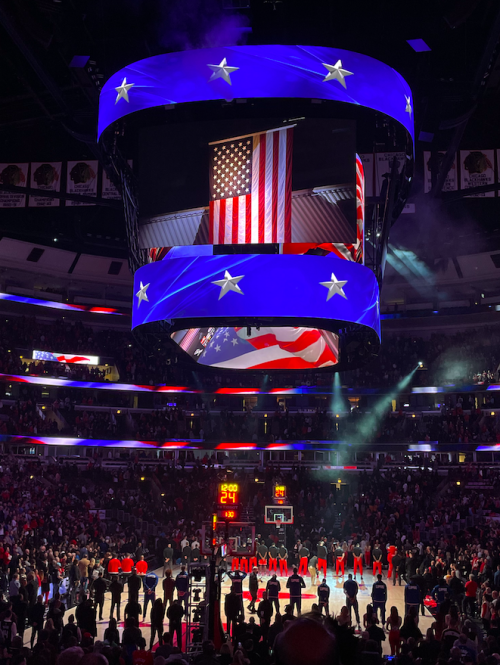