If you were invited to a press conference that was a finely crafted blend of lies, half-truths peppered with a few morsels of honest, yet disguised dialogue, what might be your takeaways? That’s the history and the mystery of the Ravens Pre-Draft Press Conference, aka the Liar’s Luncheon.

The presser started a bit clumsily as Eric DeCosta was heard voicing his disdain for Pepsi.

Perhaps the truths ended there.

You have to wonder what the Ravens intent is when they host these annual events. Are they simply trying to stay in the public’s eye during the offseason? Do they strategically use the platform to create soundbites intended to confuse – red herrings if you will? Or do they simply enjoy the facade as they troll the media, as they seek new storylines?

Whatever the rationale truly is, here we are, taking the bait and talking about it… again!

So with that said, I’ve pulled together a few quotes from Messrs. DeCosta, Harbaugh and Hortiz and put my own spin on it. Yours are also welcome.


DECOSTA: “[We’re] not sure how Ronnie [Stanley] is going to rebound. We’re optimistic. We feel… I don’t want to speak for Ronnie, and I wouldn’t speak in specifics, but we feel like he’s on a good pace to come back. In saying that, we brought in Morgan [Moses]. We have Ja’Wuan [James] on hand as well. Ja’Wuan James, who we brought in last year. We feel that there’s an opportunity in the Draft to address the tackle spot at some point, whether it’s in the first round or in the fourth round. ”

TL’s Take: The additions of Moses and James help the Ravens avoid the temptation to reach at tackle and stick to their board.

DECOSTA: “I think we’re definitely concerned [about cornerback]. If you guys know us, we always want to have a strong secondary and have as many corners as possible. We’ve referred to those guys as racecars in the past. This year, we got decimated at that position across the board. We have outstanding players coming back, but again, until they come back, it’s question marks. ”

TL’s Take: The loss of Chris Westry in free agency exacerbates a big problem – the lack of CB depth. It would be shocking if the Ravens opt not to draft a corner. I also wouldn’t be surprised to see Tavon Young return on a cap-friendly, incentive-laced deal.

DECOSTA: “We think there will be a run of those guys, probably in the Top 10. There might be a guy or two that falls down to us at [Pick] 14, potentially. I think that… Unfortunately, one of the top guys and really an outstanding prospect, [David] Ojabo suffered an injury, which was unfortunate for us, unfortunate for the league and certainly most unfortunate for him. With that being said, he suffered an Achilles. He should be back, and he should be ready to go. He’s a tremendous talent. ”

TL’s Take: Ojabo is likely a Day 2 pick. Whether he’s a second-round pick or a third-round pick is the question. The Wolverine has obvious ties to Ravens DC Mike Macdonald. It wouldn’t surprise me to see the Ravens use some draft capital to move up towards the back-end of the second if Ojabo falls that far. He’s a top-15 talent. All this said, remember when former Miami Hurricanes RB Willis McGahee, despite a horrific knee injury suffered in the National Championship Game, was still the No. 23 overall pick in the 2003 NFL Draft.

TL’s Take: The Rams and the Bucs went all-in over the last two years and each won championships. But the Bucs had Tom Brady while the Rams, despite their top-heavy big-named talent, were a bit of an outlier. They barely escaped Baltimore with a win against an injury-depleted team. They were however, opportunistic and props to them for finishing the job. But the Rams two most important pieces were both draft picks – Aaron Donald and Cooper Kupp. The Ravens approach is still the best one.

DECOSTA: “One of the [strategies] that we see more and more teams do now is they take tackles and guards and convert those guys to center – bigger guys. Often times, the smallest guy on your offensive line gets pushed into center. Our philosophy, honestly, is we want big guys. ”

TL’s Take: Tyler Linderbaum has been pegged to the Ravens at No. 14. The Ravens don’t value the position that highly. They are more likely to land a second-tier free agent or develop a player taken on Day 3 than they are spending so much draft capital on center (see Matt Birk, Jason Brown, Ryan Jensen, Bradley Bozeman). Plus DeCosta’s emphasis on size makes me think that Linderbaum isn’t a fit. Size is one of the knocks on the talented albeit relatively smallish 296 pound center. But then again, DeCosta was insulted last year over the criticisms directed toward his wide receiver room only to take Rashod Bateman with their first pick in 2021. Another smokescreen?

DECOSTA: “Well, we’re always looking at value. We’re looking at all the players; that process doesn’t end just because the first wave and maybe the second wave of free agency has passed us by. It doesn’t mean that there aren’t some good players out there still. Over the years… I can give you a lot of examples of players that we brought in. One that comes to mind that was a favorite of mine was Daryl Smith, who I think [executive vice president] Ozzie [Newsome] signed back in May after the Draft. There will be some Daryl Smith’s on this team this year. ”

TL’s Take: Daryl Smith’s will be available after the draft. There’s no need to rush to sign one now. Why commit money to a position that can be addressed less expensively on Day 3. If not addressed then it’s, “Hey Daryl, how are you? Want to go to dinner? ”

HORTIZ: “It takes a more special athlete to be an interior pass rusher and a three-down player inside. I think that’s why with our defense, it being so versatile, we can take an edge guy who’s got some size [and] reduce him in. The cool thing about this class is there are players that are edge guys [where] you see the colleges do the same thing, and they show pass-rush value inside, so I think there’s some depth from that standpoint. In terms of the three-down player inside, they’re a little harder to find. ”

TL’s Take: Love Joe’s take on this. There’s more than one-way to skin a cat. The challenge is managing down and distance in the modern era where the passing game rules. Would you rather have a run-stuffer on the field on first-down and risk easy completions or a pass rusher on first-down and give up 5 rushing yards instead of three? Aaron Donald’s don’t grow on trees nor do young Calais Campbell’s. But having interchangeable parts on defense blended with a carefully crafted game plan can help a team overcome the rarity of that three-down player Hortiz references.

HORTIZ: “[Tight end] ‘Chig’ [Chigoziem Okonkwo]he’s probably a little undersized – not your 6-5 tight end – but [he’s a] versatile player. He had an outstanding week at the East-West; I thought he showed up well down there. He put together a good season, obviously, and then performances in the postseason and in the workouts and Pro Days and Combine. He’s got speed, good mass to him – put together really well – and I think he offers some versatility. Especially [with] how we are creative with our tight ends, he’d be able to do multiple things. And then with Nick [Cross]another guy with excellent size for the position – at the safety position. [He’s got] really great range. [He’s] a physical player, and same thing [with him in] the postseason. He lit it up at the Combine, [and] I thought [he] really put out some good numbers. We had a chance, with these guys both being local, to see them at their Pro Day, bring them in, spend some time around them. [They] both carry themselves very well and represent the University of Maryland well. ”

TL’s Take: Joe is talking up Cross as part of an effort to elevate his draft status because he’s unlikely to be a Raven given the money already spent at the position. As for Chig, at 6’2 ”and with a limited wingspan, I think that limits him as a blocker and as a downfield target in traffic, particularly a target for Lamar Jackson whose inconsistent mechanics trigger issues with accuracy.

Who knows how forthcoming the GM, head coach and Director of Player Personnel were during the Liar’s Luncheon. Maybe the most honest statement can be credited to DeCosta and his poor grades on Pepsi – obviously not a red star prospect for the Baltimore Ravens

The Seahawks reportedly turned down a 10th overall pick from the Jets for DK Metcalf.https: //t.co/Pw2u5o7ad7

The EXPLODING WR market this offseason:

As for these quick hits…

The first, nothing more than man-crushing in the presence of Ray whose under-nourished ego, per usual, sucks it all up. I do think what happens in the background at the 43 second mark was rather ominous. Could Thibodeaux be another Terrell Suggs?

As for DK Metcalf, if true, the Jets are insane offering up the 10th pick in the draft to pair with Zach Wilson. Kind of reminds me of the Ravens attempt to create a pitch-and-catch tandem of Kyle Boller and Terrell Owens. Don’t get me wrong, Metcalf is a nice player but clearly a luxury, particularly when you consider the draft capital required to obtain him AND the cost to sign him going forward as described by Field Yates.

Colin Kaepernick is campaigning for a return to the NFL and the former 49ers QB got a much publicized boost from his former 49ers head coach Jim Harbaugh. So naturally, Jim’s brother John and the Ravens get attached to the Kaepernick story and Bookies.com has odds on Colin’s likely landing spot for the upcoming 2022 NFL season. 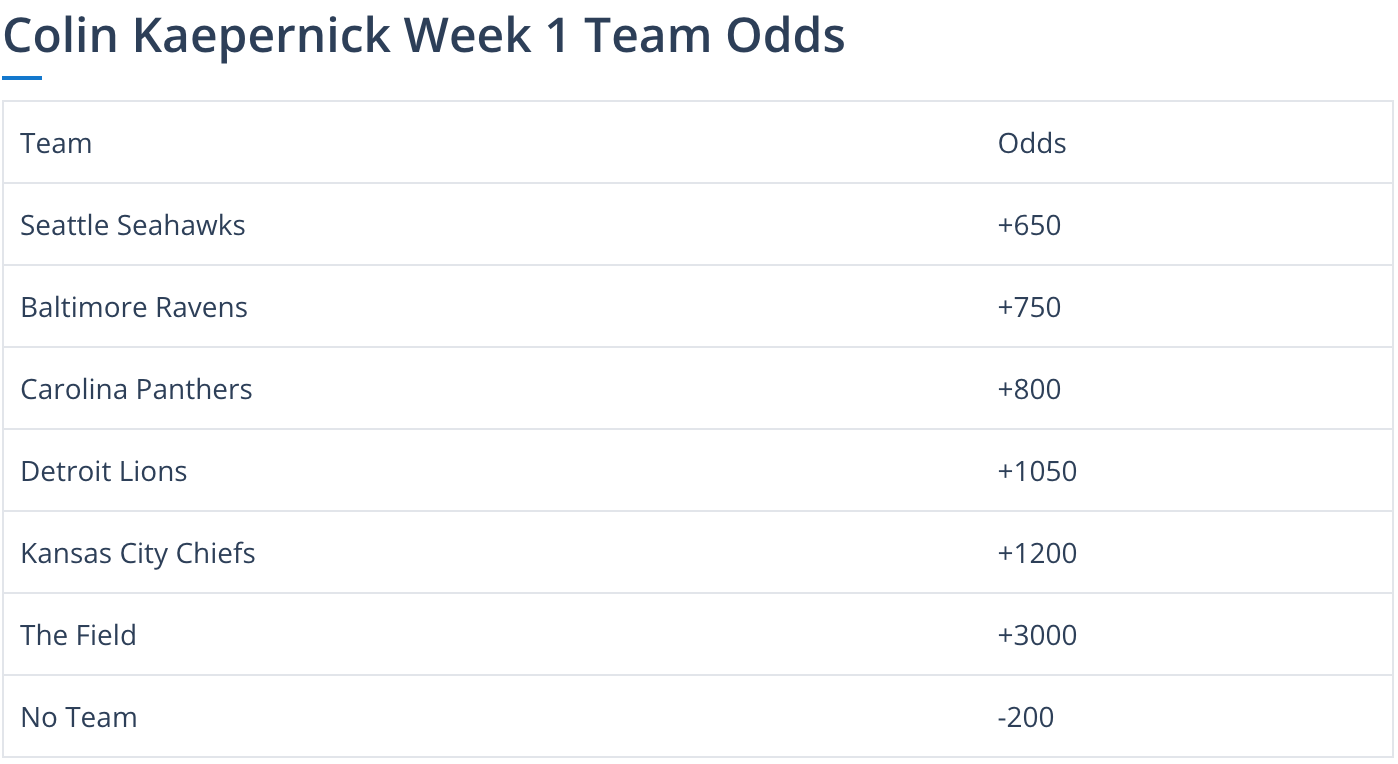 If you’re a betting man, don’t waste your money on the Ravens, thanks at least in part to Kaepernick’s long-time fiancé, Nessa.