With the 2022 NFL draft less than a week away, all 32 teams are putting the finishing touches on their plans heading into the three-day event, however, no one can predict what will happen once the draft kicks off.

Miami Dolphins general manager Chris Grier targeted offensive tackle this offseason as a position of need, and he was able to lure in the biggest fish in free agency – Terron Armstead. The right tackle spot is still up for grabs, and they could always use some depth, so it wouldn’t be too surprising to see Miami go after another tackle that’s coming into the league.

The Dolphins may not have a draft selection in every round, but because they could obviously trade up, these are seven offensive tackle options that could consider drafting, one in each round.

“Three-year starter with rare combination of measurables, talent and pedigree. Neal has experience against the best competition the college game has to offer. He has started at both left and right tackle and should project on the left side if he can continue to manage his weight. While he has flashes of greatness on tape, he doesn’t always maintain that level throughout a game. Intensity and consistency are two areas that will be key in matching performance with profile. Technique has been drilled into him and Neal plays with good fundamentals across the board. He’s well-versed and capable in a variety of run schemes and has correctable areas of improvement in pass protection. Neal will come into the league as a good NFL starter, but greatness will require additional attitude and action. ” 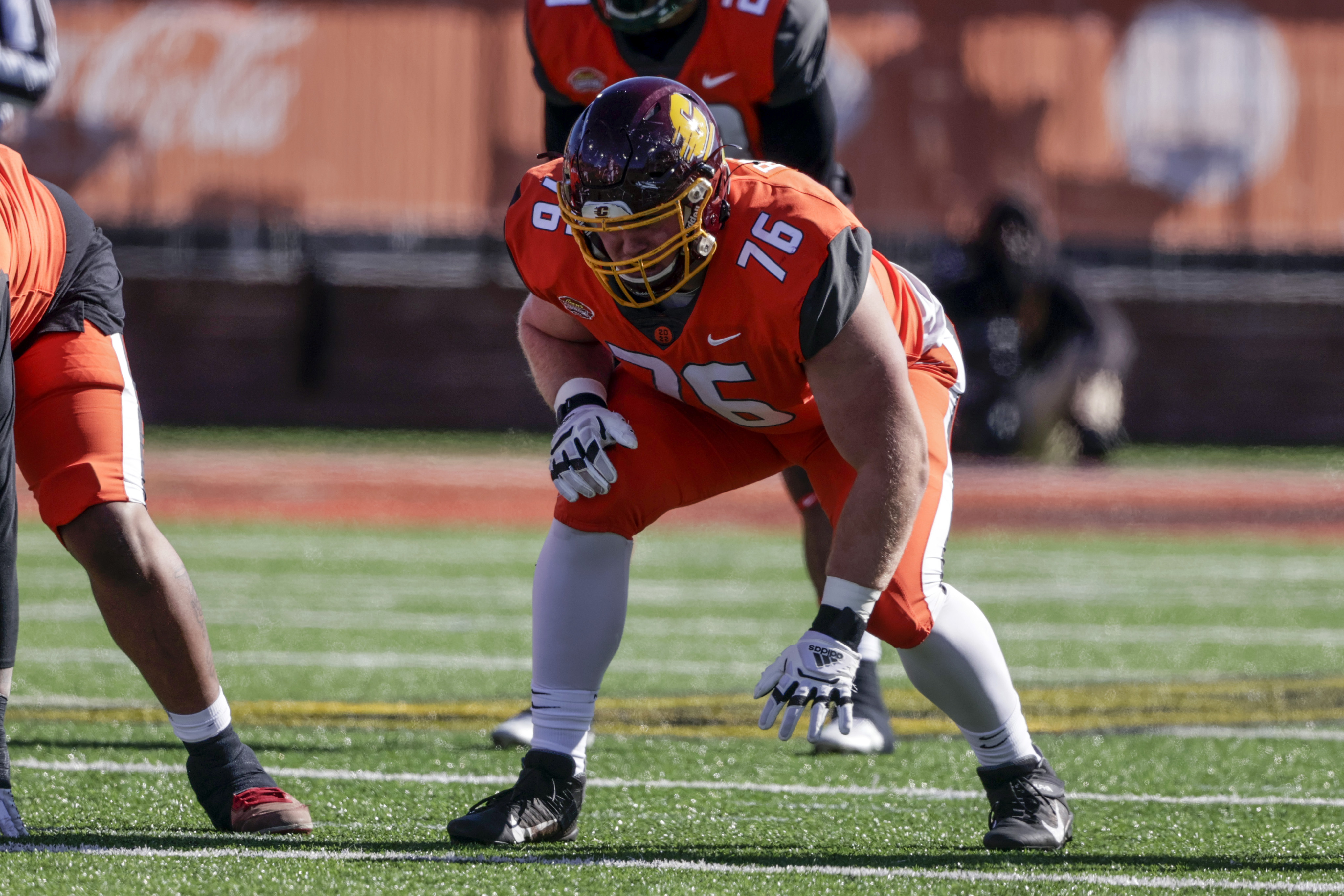 Here’s what Zierlein wrote about Raimann:

“With alluring athleticism and an impressive skill set, Raimann is just scratching the surface of his potential. His initial transition from tight end to left tackle occurred in 2020 amid the COVID-19 pandemic, making his rapid transformation fairly remarkable. He is a much better technician than he should be at this stage, but his approach is also mechanical and he could struggle against sophisticated edge defenders until he learns to diversify his pass sets and hand usage. Raimann’s instincts and fundamentals at the position are still in a developmental phase so bumps in the road are expected, but his best football is ahead of him and he should become a long-time starter at left tackle. “ 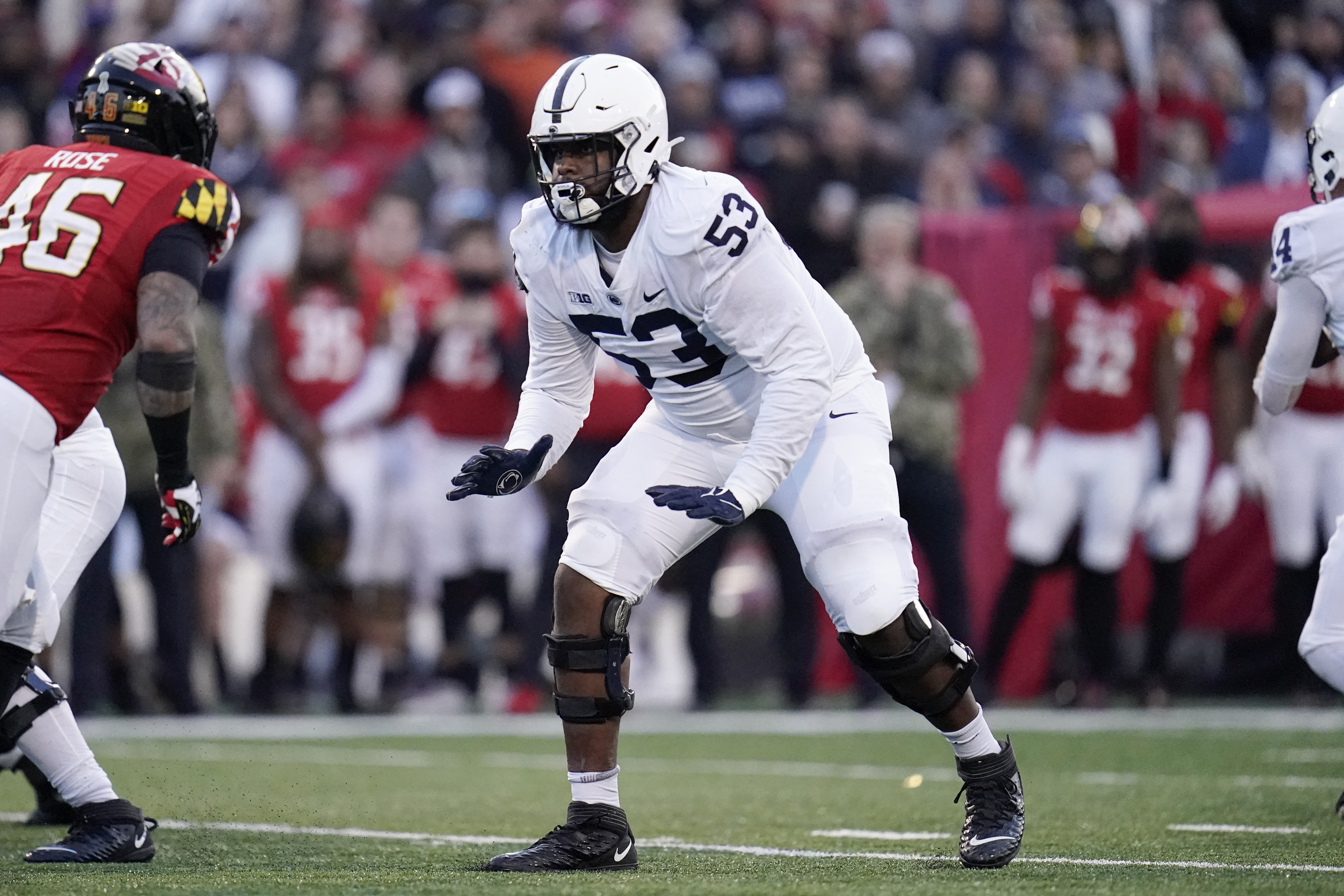 Here’s what Zierlein wrote about Walker:

“Walker possesses enticing power and measurables but has issues that could be challenging to correct if he stays at tackle. Ohio State defenders were able to burn up his outside edge, which creates concern about his pass pro range, but it can be hard to beat his anchor with pure power. He has issues playing beyond his base, creating chronic over-extension that will be exploited by skilled NFL rush talent. He’s capable as a run blocker and should keep getting better with more hand work. Walker projects as a right tackle on the next level but might move inside to guard if his range and balance in pass sets aren’t up to par. ” 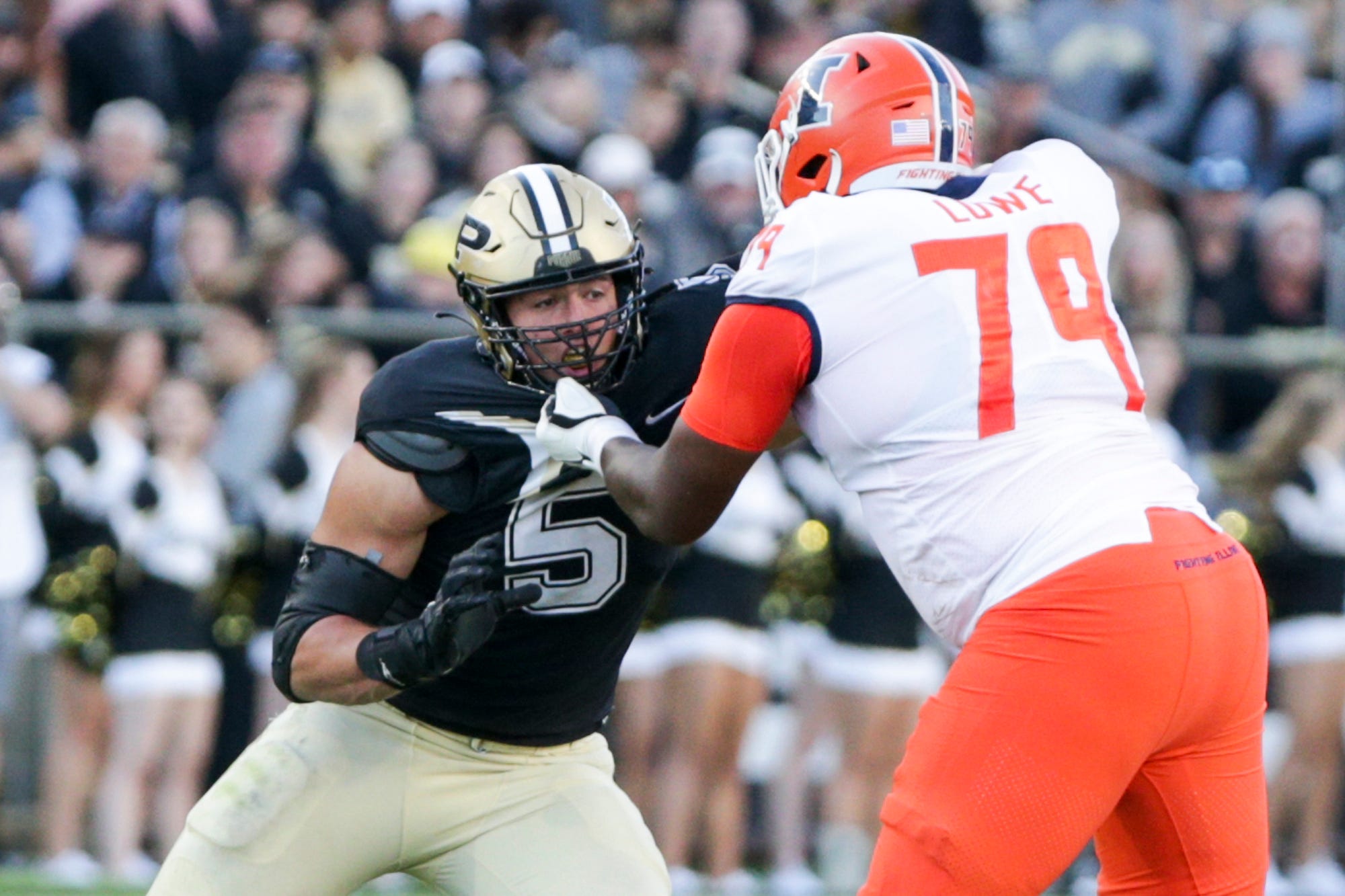 Here’s what Zierlein wrote about Lowe:

“Offensive line prospect who checks multiple boxes in both the traits and intangibles categories. Evaluators are sure to love Lowe’s personal character as well as his measurables. He’s big, strong and long but needs to play with better hand accuracy and technique to fully unlock those traits. Bend and athleticism are both strengths for Lowe, who is a scheme-independent talent. He’s allowed too many pressures and sacks during his career but has the tools for rapid improvement with a few coaching fixes. Lowe is worthy of middle-round consideration as a swing tackle with guard potential. ” 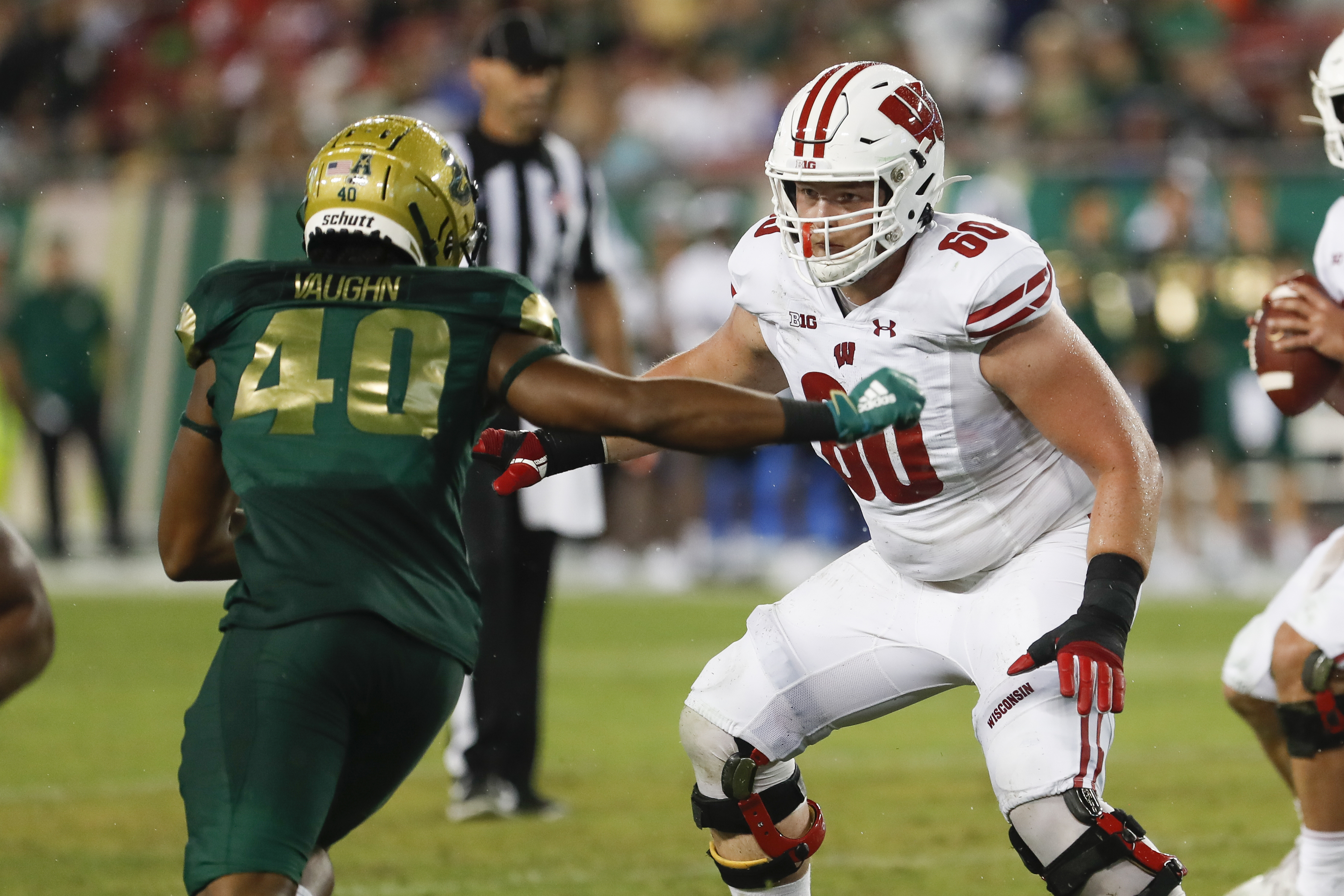 Here’s what Zierlein wrote about Bruss:

“Guard prospect with tackle flexibility who appears to be well-equipped for the NFL game. Bruss is well-proportioned with athletic feet and good core strength. He takes efficient angles to the block in Wisconsin’s zone-heavy running scheme but has the body control, leverage and play strength to operate in any running scheme. Leaning and oversetting are occasional problems, and he needs to improve his hand work in order to keep from getting behind in the early stages of pass protection. Bruss is well-rounded with an athletic profile and should become a good starter early in his career. ” 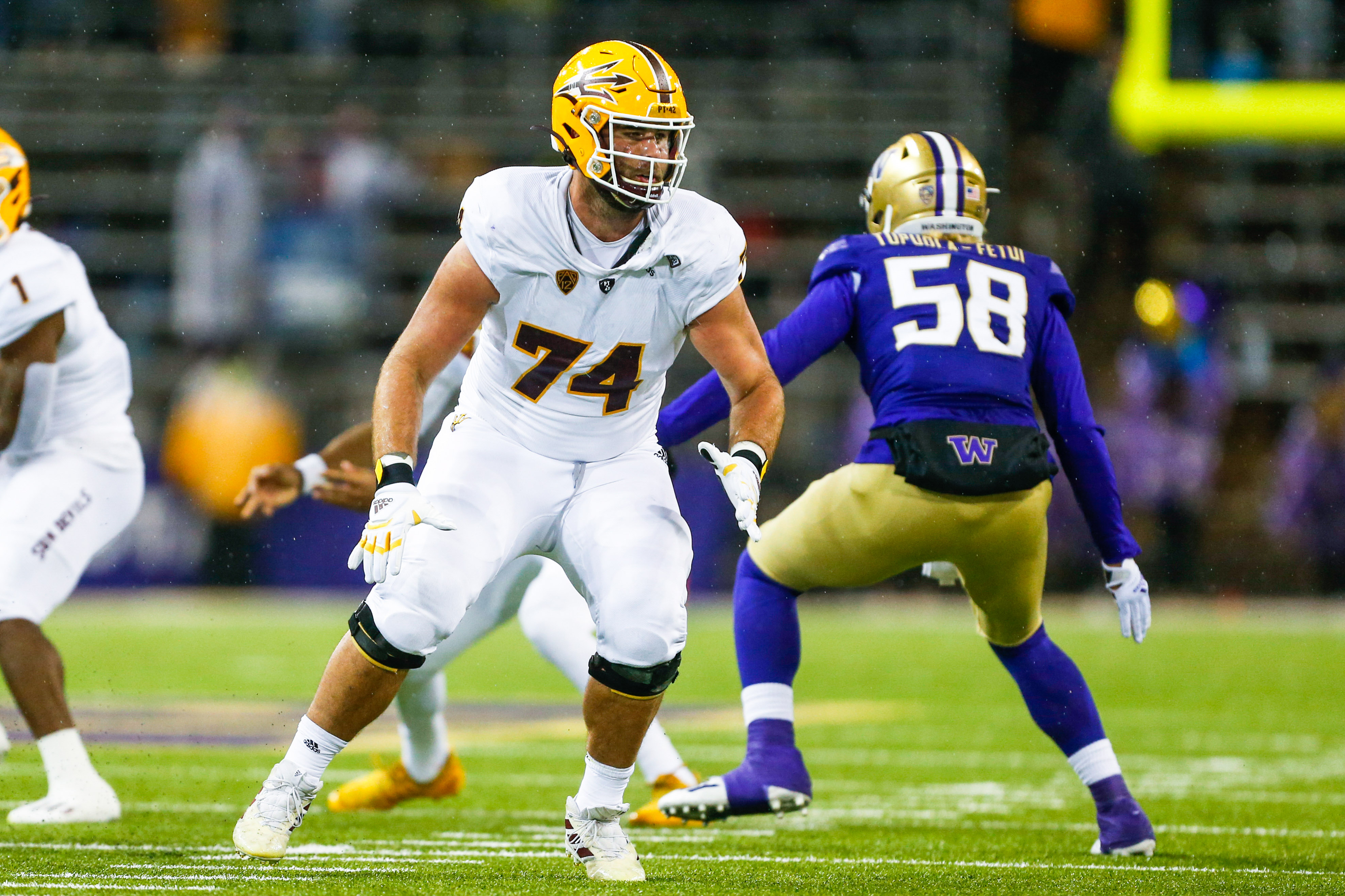 Here’s what Zierlein wrote about Diesch:

“Diesch is highly athletic with the initial quickness and fluidity to stand out on reach blocks, second-level cut-offs and long pulls in space. He’s scheme-dependent, lacking strength to generate movement as a drive blocker. He lacks functional length and the anchor needed to keep NFL speed-to-power rushers from ruining his day. If he can add the necessary strength and mass, he’ll have a chance to find snaps in a heavily move-oriented offense. ” 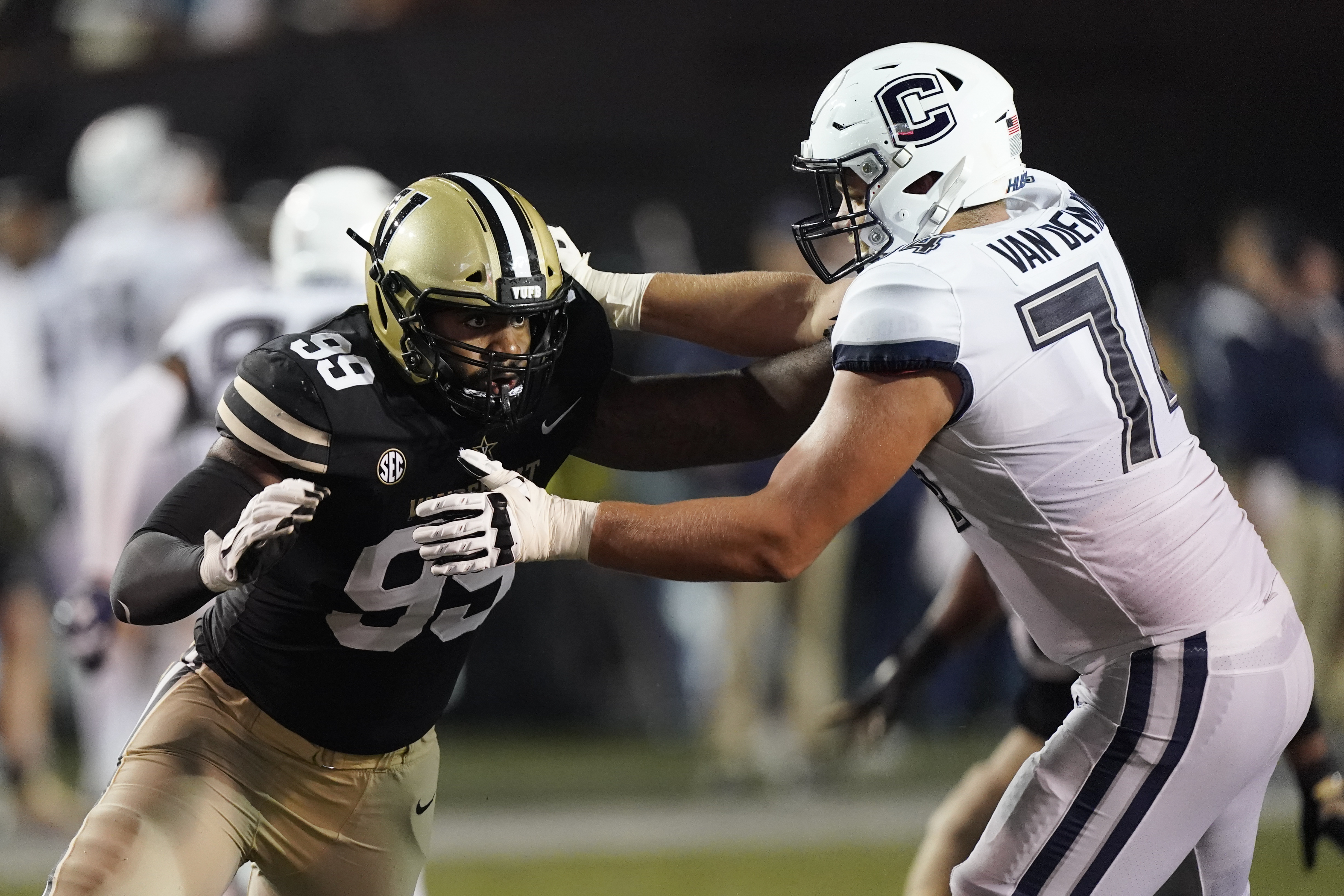 “Four-year starter with appealing length, athleticism and leadership traits to sell to teams. Van Demark lands in a classic role as a likely late-round move tackle. He’s scheme-dependent, requiring a fit with a zone-heavy team as he will be much better at getting to the spot than commanding the one in front of him. He’s likely to be unable to win a battle of wills against NFL power at the point of attack and his athletic ability doesn’t help as much as expected in pass pro due to a disconnection between his hands and feet. The traits give him a chance to be drafted but his frame and upside might be maxed out. ”