LOS ANGELES, Calif. – Jordan Spence has always had his family behind him on his journey to the pro hockey ranks.

So, there was no question where they would be when the defenceman from Cornwall, PEI, made his recent National Hockey League (NHL) debut – cheering him on from their seats in the Crypto.com Arena in Los Angeles.

“Luckily, for me, I knew the day before I was going to be in the lineup, so I called my parents (Adam and Kyoko Spence) right away,” said the former Summerside D. Alex MacDonald Ford Western Capital, who recently made his NHL debut and scored his first goal with the Los Angeles Kings.

“They came to LA to watch three games. It was pretty exciting for them to come and watch my NHL debut. I wouldn’t be here without them and all the sacrifices that they made. It was pretty cool for me to see them at my first NHL game. ”

After receiving the news from Jordan regarding their son’s NHL debut late in the afternoon of March 9, the Spences immediately began working on travel plans. They had tickets booked by 11 pm, and the next day, at 6 am, his parents, along with Kairi, his 17-year-old sister, and his girlfriend, Caitlyn McCloskey, were flying to Los Angeles.

“Just being able to be there, see him and share that with him, I can’t really put it into words what it meant for us as parents to see him achieve something he’s worked so hard to try to get to,” said Adam .

Jordan, who wears No. 53 with the Kings, also made history as he became the first Australian-born player and first skater with Japanese citizenship to play in an NHL regular-season game. 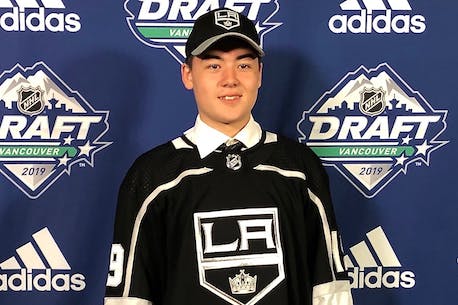 Jordan was born in Manly, Australia. The Spence family moved to Japan when he was a baby. The family relocated to PEI in 2012.

“It’s an honor, and maybe it promotes (hockey) a little in Australia and helps young kids pursue their careers in hockey,” said Jordan, selected in the fourth round, 59th overall, in the 2019 NHL Entry Draft by the Kings. “Hopefully, they see that and believe in themselves.”

“I wouldn’t be here without them and all the sacrifices that they made. It was pretty cool for me to see them at my first NHL game. ”

Since his NHL debut on March 10, Jordan, who stands five-foot-10 and weighs 180 pounds, has made a positive impression. In 15 games, Spence has five points and is averaging just under 20 minutes of ice time a game. He played 20 or more shifts in 14 of those games and had 19 shifts in the other one.

Lisa Dillman, a senior writer for The Athletic who covers the Kings, compared Jordan’s journey to the NHL to that of 23-year-old Sean Durzi, who was called up early in the season. Both started the season with the American Hockey League’s Ontario Reign in California and received an opportunity with the Kings because of injuries.

“Here he is, he started the season in Ontario and now he’s running the second power-play unit (in the NHL) at age 21,” said Dillman referring to Jordan, who had 42 points in 46 games with the Reign.

In a recent interview with SaltWire Network, Dillman said the six defencemen in the Kings’ lineup on opening night have all been sidelined with injuries at one point during the season. It has provided an opportunity for the young defencemen, including Jordan, to gain valuable experience.

Dillman said the Kings like what they have seen from Jordan.

“I asked (head coach) Todd McLellan recently about Jordan specifically,” said Dillman. “I said, ‘It seems to me he is one of those players that does not make the same mistake twice,’ and Todd McLellan agreed with that, ‘You are absolutely right; he does not do that, and his hockey IQ is off the charts. ‘”

Jordan’s first NHL regular-season goal makes it a game-winner. Jordan scored at 15:47 of the second period to give the Kings a 3-1 lead en route to a 4-2 win over the Seattle Kraken on March 26.

Jordan said it was a moment he has always dreamed of and admitted the thought of scoring his first NHL goal was always in the back of his mind, although he did not want to think about it.

“You grow up watching the NHL and wanting to be on that level and be able to play in the NHL and score a goal at that level, there were a lot of emotions going on. I was really excited. ”

For those interested in actually seeing the goal. https://t.co/p8wFu7PY2m pic.twitter.com/vJPJSlhu2w

That emotion carried over to a post-game conversation between Jordan and his parents.

“It was a little bit of a tear-jerker,” said Adam, who recently accepted the 2021 Sport PEI junior male athlete of the year award on behalf of Jordan. “It was something we talked about in our own personal stories in conversation.

“When he scored the goal, most people have seen the game or the highlights, you saw the look in his face, it was something special… unbelievable.”

Asked about his plans for the puck, Jordan said the Kings are doing something with it to mark the occasion. He plans to present it to his parents.

“For what they have done (for me),” Jordan said. “I am here because of them. It’s a little appreciation and thank you from me to them, so hopefully, they like it. ”

“He made a point of talking about his parents and the things they had to give up for him to pursue his career and his dreams. He hasn’t done it once; he’s done it a couple of times, and it really resonates. ”

Dillman said Jordan’s close relationship and appreciation for everything his family has done for him is clear. Dillman, who has written about Jordan’s journey to the NHL, added it was fantastic that Jordan’s family was able to travel across North America on short notice to share in his NHL debut.

“(Jordan) made a point of talking about his parents and the things they had to give up for him to pursue his career and his dreams,” said Dillman. “He hasn’t done it once; he’s done it a couple of times, and it really resonates. ”

Jason Simmonds is a sports editor with the SaltWire Network in Prince Edward Island.