If the breath of fresh air brought by the arrival of the new head coach of the Canadiens is still noticeable, it is mainly thanks to his unique approach, believes Alexandre Picard.

“On a professional level, there aren’t many coaches like St. Louis who talk to players individually as often. I don’t remember a coach who did that,” said the former defender in the TVA Sports podcast “Temps d’Arrêt.” Listen here:

“St-Louis does it for the right reasons, because he’s passionate about it, not to try to look good. He does it without any preconceived ideas. It’s super refreshing, ”added host Louis Jean.

“I don’t know if you can maintain this for very long, but one thing is certain: the players drink in the words of their coach. They pay attention to what he asks them to do. They want to learn and improve. They want to demonstrate that they are not a 32nd-ranked team, that they are better collectively and individually than others may think.

This is precisely what the CH demonstrated last week by offering strong opposition to three powers of the Eastern Conference: the Bruins, the Panthers and the Maple Leafs.

“From what I see, with the St-Louis approach, we find a way to stay competitive, we never give up, we always keep working. It impresses me for a team in last place, underlined Picard. I was part of teams that were in the same situation, and I can say that if we lost 2-0 after a period, the match was over and the effort was not 100% thereafter.

“When a team is officially eliminated from the playoffs, you want them to show some pride for the rest of the season, and that’s what we see from the Canadiens.”

Speaking of pride, this is the feeling felt by millions of Canadians following the historic qualification of the national soccer team for the next World Cup in Qatar.

Alex and Louis also see similarities between the approach of St-Louis and that of coach John Herdman.

“It’s important to have coaches who make you believe that you are the best player, the best team, so that you are full of confidence. This is Soccer Canada’s approach and it’s a bit the same thing that I’m seeing with Martin St-Louis right now,” Picard said.

“It’s extraordinary what Herdman has done. I understand that it is not on the same scale, that it is on a world level, but I really see a connection with Martin St-Louis on the impact that a coach can have on his players, mentioned the host from podcast.

“Herdman succeeded in making the players believe that they are capable of achieving great things and that they can overcome any test in front of them. This is what allowed him to rebuild the men’s program.

Louis and Alex reflect on Canada’s historic qualification for the Soccer World Cup.

According to them, there are comparisons to be made between the approach of John Herdman and that of Martin St-Louis.

Alex is impressed with CH’s ability to remain competitive game after game.

Due to injuries, several players are seizing their chances to assert themselves. This is particularly the case of Laurent Dauphin and Alexander Romanov.

“At this point in the season, all the players are auditioning. Management is looking at which players will be back next season. One thing is certain, the team will be completely different in October. There will be a lot of changes between now and then.”

Alex and Louis praise Jake Allen’s professionalism and talk about his importance in the locker room. “He’s the unifier of the team.”

David Savard looks like Serge Savard (!) since his return to the game even if he returned earlier than expected. “I like the Savard-Romanov pair.”

The importance of establishing a good work ethic and a winning team culture. “That’s what keeps you in games against good teams, like the Panthers and the Avalanche.”

Does Mike Hoffman have a future in Montreal? “Yes, but I always have doubts with a player like him or Joel Armia. The effort is not constant in their case.”

Alex and Louis analyze the work of young defenseman Justin Barron, acquired from the Avalanche at the trade deadline.

As for Jordan Harris, Louis says “expectations of him should be moderate.”

The Maple Leafs are back in the top 3 of the Atlantic Division, which is particularly tough. “A lot of good things are happening in Toronto lately.”

Alex and Louis reflect on Saturday’s crazy game between the Flames and the Oilers which ended 9-5 in favor of Calgary.

On Sunday, no less than 13 goals (!) were scored in the game won by the Penguins 11-2 against the Red Wings. “The Penguins are surprising. You should never bet against them.”

Goaltender Marc-André Fleury had a winning start with the Wild.

“There is extremely healthy competition between Fleury and Cam Talbot. The Wild are a well balanced team.

In closing, a few words about Alexis Lafrenière, who is having a good time right now.

“What impresses me is that he has collected at least one point in six straight games when it is the most difficult period in the NHL. He begins to find his game.” 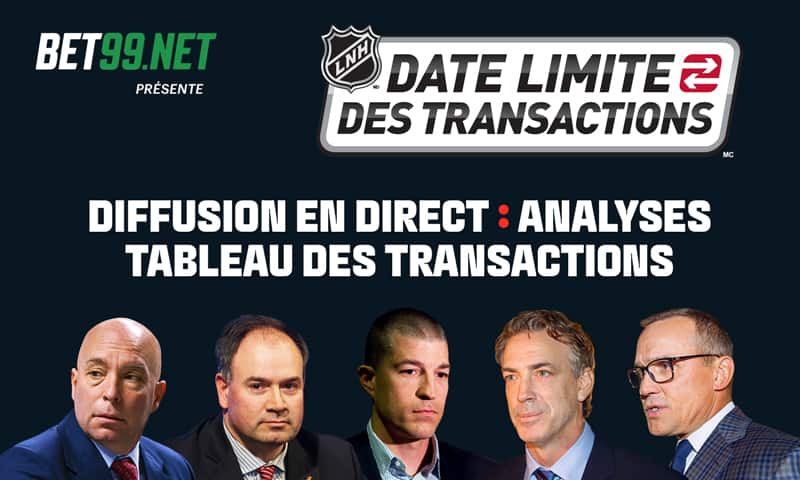